On June 29, 2018, the event was marked with a formal opening. The modern structure will be the nerve center of the company’s expanding network that offers innovative financial services and opportunities to Cambodians.

Designed and constructed by the renowned architectural firm ADI Architectural Company, the head office’s inauguration began with a formal blessing and ribbon-cutting in the morning. This was witnessed by 300 people including Amret management and staff along with distinguished guests from the government and financial sector.

Mr Chea Phalarin, Amret’s CEO, and H.E. Mr Chea Chantho, governor of the National bank of Cambodia, presided together with Mr Sreng Samrok, board member and representative of the board of directors.

The guests enjoyed specially prepared cocktails and refreshments along with a tour of the new office building. A milestone wall was placed inside the building so everyone could see the full history of Amret. 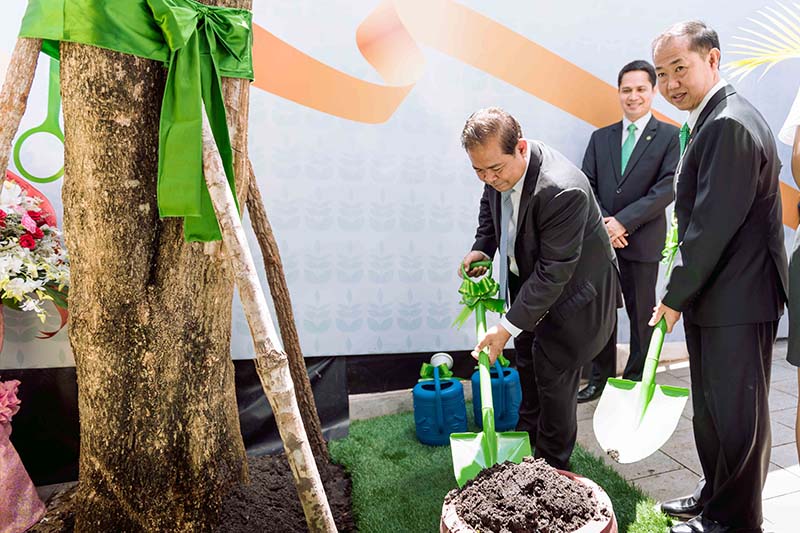 Amret Microfinance Institute began operations in 1991 as a credit project with GRET, a French NGO, and cooperated with the Ministry of Agriculture, aiming to test micro and rural credit for low-income clients.

With continued support from the government and stakeholders, Amret transformed into a private limited company in 2000 and obtained the first MFI license in Cambodia in 2001. Thanks to a positive growth trend and its expertise, Amret obtained another microfinance deposit-taking license from the National Bank of Cambodia (NBC) to legally mobilize local savings in 2009.

After a long partnership with Advans, Amret became full member of the Advans Group in 2015, Advans is a leading international microfinance group present in nine countries today. Amret has a sound foundation, and an impressive track record in social and financial performance. It significantly contributes to rural and economic development in Cambodia.

The new head office is the latest addition to Amret’s network which has over 156 branches spread throughout the country’s cover 25 provinces. Amret has a total customer base of more than 400,000 clients. The business has also created more than 4,000 jobs in the country, and has facilitated the growth and expansion of micro-, small- and medium-sized businesses as well as helped clients to improve their standard of living.